I have always been interested in photography, but never really took the time to learn how to make my pictures better. My parents bought me a Kodak Easyshare camera in the early 90's and I thought it took nice pictures.

Then I dropped it!

I was taking pictures of cards for my blog, set it down to switch cards, and somehow bumped it enough that it tipped and fell off the cabinet where I was working. I cried. Then I called my husband and asked him what I should do. I took it to the local camera store and cried again when I found out it would cost more to repair it than it did to buy it.

So my husband said "let's go buy a new camera".

I wanted another on just like the last one, but he said, no, let's get a GOOD camera.

OK, but what kind? I've been addicted to The Pioneer Woman's website for a few years now, and she does tutorials about photography on her site (as well as blogging about her life on a ranch in Oklahoma and sharing awesome recipes). She has talked a lot about Nikon vs. Canon with the pros and cons of each. I wanted to get a Nikon, because that was she uses.

We bought a Canon Rebel.

I like it, but it's taken awhile for me to get comfortable with it. I've read a couple of digital photgraphy books and have learned a few things, but I don't always get the camera out to try what I've learned. I do take pictures of my cards, did take pictures of the horses when we had them, and try to take pictures of my husband and son, but they are not willing subjects. They HATE having their picture taken.

I've read about people doing a picture-a-day project and a friend even showed me an album she made of hers. It got me thinking...the new year would be a good time to start, but I had missed almost a week already.

Then this morning I found this...

MCP Project 52: One Photo a Week – Join in Anytime!
In photography, as with any job or hobby, it is easy to get into a rut. If you have ever needed a little photography lift, challenge or some inspiration, that is what the new MCP Project 52 is all about. Imagine taking pictures once a week just because you feel like it. Visualize photographing something while not pressured for the perfect shot. Envision shooting just for yourself. Every week for up to 52, starting today, you can join MCP Project 52. You will be able to shoot something important to you, like your child, nature, the city, or something silly you just notice, like your toenail polish chipping. Or if you are up for a challenge, you can even play along with our weekly suggested theme.

This sounds much better for me! So I joined!﻿ I missed the first week, which was to take a picture of something in your home. But I did take pictures of how I organize my stamps on New Year's Day, so this will be my first picture: 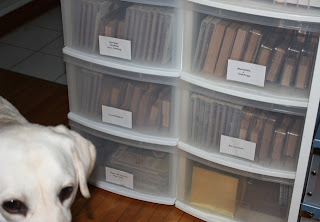 Not terribly exciting, but it does show things in my home: Sydne, the carts with my stamps in them, and the wood floor in the office.

Now I need to take a picture for this week's assignment, which is to illustrate a song. Maybe I'll see something in Nashville if I can't come up with anything before I leave. We're supposed to have our pictures posted to Flickr by Friday night, which may be close to impossible since I'm not bringing my laptop with me. Maybe I'll take a picture with my phone and use it to post. We'll see what happens! I'll also be posting them on here.

My challenge for you is to do something similar! Either join Project 52 or do something on your own. I'm thinking about using My Digital Studio to scrapbook each week's picture and then have an album printed. So take new pictures and scrapbook them or work on the ones you already have!