2 posts in one day...just trying to catch up!
Pictures from yesterday's Stamp-A-Stack will start tomorrow!

Late again, but this time it was because I was busy getting things ready for the Stamp-A-Stack on Saturday. I was so focused on stamping I completely forgot about photography. Earlier in the week I was thinking about the assignment and wanted to take a picture of the farm. I thought all the snow would make an interesting "shades of gray" photo. Yeah, then it got a little cold. Friday morning it was 29 below for the actual temperature. Saturday the high was zero. This morning it was 24 below. Too cold to be standing outside taking pictures!
Instead, here's a picture I took a day or 2 after Christmas. As I was walking upstairs, I looked out the window on the landing and saw this turkey hen in the pasture. We've had turkeys out in the fields, but never this close to the house. 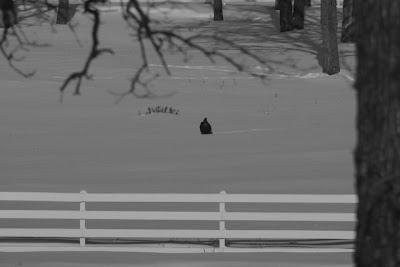 I thought the program I use to edit my pictures would change it to black and white, but it doesn't. So I just played around with the saturation and made it gray.

Not exactly what I had in mind, but it turned out kind of cool.
The assignment for Week 4 is "Soothing Repetition". My first thought was all of the cards I made before I went to Leadership. I should have taken a picture of them all spread out. Too late now! I'll have to think of something else...
at 9:25 PM