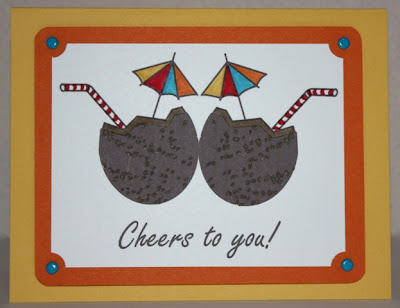 Saturday was my oldest sister and brother-in-law's anniversary (same sister as yesterday's birthday card). They have been going to Mexico pretty much every year and enjoy drinking margaritas and Sol Beer. I was going to use the Cheers To You set that I used on the card yesterday, but decided I wanted the drinks to be bigger. So I opened My Digital Studio and found the Tropical Party set that was in the Summer Mini catalog last year. I thought the coconut drinks would be perfect! I made one the size I wanted and rotated it a little, then made a mirror image next to it. I added the greeting, changed everything to Chocolate Chip and then printed it on Whisper White card stock. After coloring the image, I punched the corners with the Ticket Corner punch, layered it on a piece of Pumpkin Pie, used the Corner Rounder Punch, added the Tempting Turquoise brads, and attached everything to a So Saffron card base. Another clean and simple card, made even easier by using My Digital Studio!
Don't forget the Digital Starter Kit is 30% off during the month of May! Over a $320 value for just $122.50! Sign up today!
at 8:00 AM