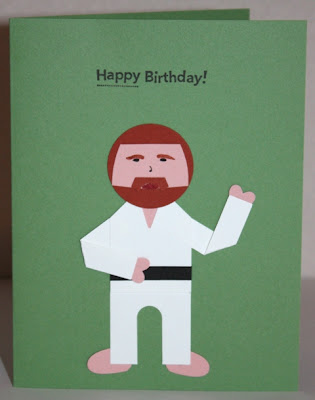 Another Stampin' Up! Demonstrator had made a Valentine's Day card for her husband with Chuck Norris made out of our punches. Our son Chase is a big Chuck Norris fan (especially the jokes!) so I showed it to him. He said he would like a birthday card like that. Well, yesterday was his 15th birthday, so this is the card I made for him! I wish I could remember who made the card we saw so I could give her credit. The colors I used for Chuck are Whisper White, Basic Black, Blushing Bride, and Cajun Craze. He's on a Wild Wasabi card base. I tried to find a Chuck Norris joke about birthdays, but wasn't able to, so I put this on the inside instead: "When you think you have felt your phone vibrate but it hasn't, that's because somewhere in the world Chuck Norris has sent a text." Chase loves to text! My Dad tells him he's going to get carpalTHUMBal!
at 10:04 AM